Posted on February 24, 2014 by Polishing Your Prose 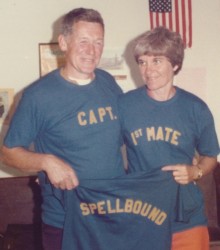 Loren and Jody Edwards at their bon voyage party, 1977.

Today marks the 36th anniversary of the deaths of my parents, Loren and Jody Edwards, aboard their sailboat Spellbound in French Polynesia. The mystery of their deaths remains unresolved.

As many of you know, I had originally intended to launch Dare I Call It Murder?: A Memoir of Violent Loss a year ago today, but legal complications delayed the release. That roadblock out of the way, it’s now been nearly eight months since the book came out. 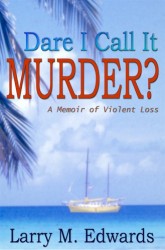 I wrote the book not only to tell the untold story of the deaths, the FBI investigation, and the impact the deaths had on my family, but, in broader terms, to illustrate the devastating and life-long effect violent death and loss can have when a loved one dies in an unwarranted, unexpected and violent manner.

Sadly, this story is not unique. I have been contacted by numerous people who have had similar experiences in their lives, and they have thanked me for writing this book, because they learned they are not alone, they are not crazy, and they can get help in dealing with the deep emotional impact that accompanies violent loss. And for that I am grateful.

My next project involves editing and publishing a guidebook for those who have had a loved one murdered and want help in dealing with the death and its aftermath, and who do not know what to expect from or how to deal with the criminal justice system. More details to come as we get closer to the release date, which will be sometime this summer.

Larry M Edwards is an award-winning investigative journalist, author, editor and publishing consultant. He is the author of three books, and has edited dozens of nonfiction and fiction book manuscripts. Under Wigeon Publishing, he has produced six books. As author, "Dare I Call It Murder? A Memoir of Violent Loss" won First Place in the San Diego Book Awards in 2012 (unpublished memoir) and 2014, Best Published Memoir. The book has also been nominated for a number of awards, including: Pulitzer Prize, Benjamin Franklin Award, Washington State Book Award, and One Book, One San Diego. As Editor, "Murder Survivor’s Handbook: Real-Life Stories, Tips & Resources" won the Gold Award in the 2015 Benjamin Franklin Book Awards, Self-Help. For a sample edit and cost estimate, contact Larry: larry [at] larryedwards [dot] com -- www.larryedwards.com -- www.dareicallitmurder.com -- www.larryedwards.com/wigeonpublishing/
View all posts by Polishing Your Prose →
This entry was posted in My Book, Violent Loss and tagged bereavement, grief, grieving, Jody Edwards, Loren Edwards, PTSD, sailing, Spellbound, violent loss. Bookmark the permalink.