With Mother’s Day just a few days away, I began to wonder about the history of the day purported to honor mothers. Did it exist during the U.S. Civil War? If it did, Oney F. Sweet never mentioned it.

In the 1850s, Ann Reeves Jarvis, a women’s organizer in Virginia, held Mother’s Day work clubs to improve sanitary conditions and try to lower infant mortality. During the Civil War the groups also tended to wounded soldiers, Union and Confederate.

Jarvis’s daughter Anna carried on the tradition and organized the first official Mother’s Day in 1908—then spent decades defending it from commercialization. (And we can see today how well that worked out.) 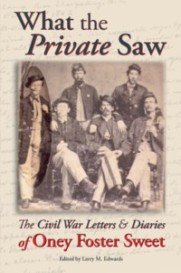 While I cogitated on this, it struck me that almost all of the letters in What the Private Saw are letters that Oney F. Sweet wrote to his mother, Caroline Foster Sweet. Only one letter is addressed to his father, and that is somewhat business-like.

Following the war, Oney wrote a retrospective piece, and in it he said:

At Antietam when the minnie balls were coming pretty thick out of a corn field I was putting a shell into the gun. [John Given] was ready to ram it. He said, “Sweet, do you hear them calling you cousin?” I don’t believe I even smiled then as the bullets were pretty thick. If I remember thinking at all it was of mother at home.

This is not to say that he didn’t write to his father on other occasions, just as he wrote to his sister Sarah and brother Willie. Perhaps those letters, if they existed, were lost.

Nevertheless, as a 19-year-old gone off to war, Oney appears to have written primarily to his mother. He wanted her to know that he was safe, how he was getting along, and the details of the battles in which he fought. He also informed her of the fate and condition of the packages she had sent to him, and he requested items from her, in one instance asking her to make a shirt for him, and to send him a “housewife” (sewing kit) so he could mend his torn and worn clothing.

I have no doubt that this symbolizes such relationships over the centuries, when a son — and today a daughter — goes off to a war from which he or she may not return alive.

That, in part, is why Oney F. Sweet’s words transcend the Civil War to become a timeless human story and give us an opportunity to reflect on such horrific events and the toll they take, not only on the battlefield, but back home. 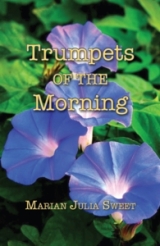 Oney’s daughter Marian also seems to have given some thought to this. She wrote a novel about a man who went off to fight in the Civil War, leaving his family behind. She drew from her father’s letters and diaries, and perhaps Julia’s grandmother Caroline told her about her own fears and worries while her son Oney fought in the war for nearly four years.

That book, Trumpets of the Morning, serves as a companion to What the Private Saw, and is available at Amazon.com.

To mothers everywhere, I wish you a happy Mother’s Day, and let’s not forget its traditional, noncommercial roots.

Larry M Edwards is an award-winning investigative journalist, author, editor and publishing consultant. He is the author of three books, and has edited dozens of nonfiction and fiction book manuscripts. Under Wigeon Publishing, he has produced six books. As author, "Dare I Call It Murder? A Memoir of Violent Loss" won First Place in the San Diego Book Awards in 2012 (unpublished memoir) and 2014, Best Published Memoir. The book has also been nominated for a number of awards, including: Pulitzer Prize, Benjamin Franklin Award, Washington State Book Award, and One Book, One San Diego. As Editor, "Murder Survivor’s Handbook: Real-Life Stories, Tips & Resources" won the Gold Award in the 2015 Benjamin Franklin Book Awards, Self-Help. For a sample edit and cost estimate, contact Larry: larry [at] larryedwards [dot] com -- www.larryedwards.com -- www.dareicallitmurder.com -- www.wigeonpublishing.com
View all posts by Polishing Your Prose →
This entry was posted in Civil War and tagged Antietam, Appomattox, civil war, Gettysburg, mother's day, women. Bookmark the permalink.

1 Response to Mother’s Day and the U.S. Civil War