What the Private Saw: Antietam

Posted on September 25, 2015 by Polishing Your Prose 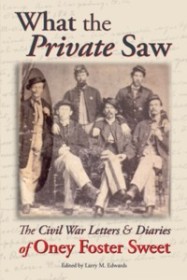 What the Private Saw: The Civil War Letters & Diaries of Oney Foster Sweet

On Sept. 25, 1861, Private Oney Foster Sweet wrote to his mother, Caroline Foster Sweet, from Harrisburg, Pennsylvania. He and his comrades in the 1st Pennsylvania Light Artillery, Battery F, believed the war would be over in a few months, and they would be home by Christmas:

We live tip top, have peaches and cream and peach pie, etc. . . . I expect there will be some fighting near Washington soon and I want to be down there when they fight. . . . Do not worry about me, I will take care of myself. I think I shall like a soldier’s life first rate.

A year later, however, following the Battle of Antietam, he revealed a different mindset:

I went over the field after the fight and the dead and wounded lay so thick you could hardly step. Some had legs, arms, and heads torn off. Some groaning and breathing their last. I never want to see such a sight again and I hope I may never have the bullets fly so close to my head again. I have seen enough of war.

He did not know at the time that the war would last another two and a half years, that he would see that scene repeated many more times. 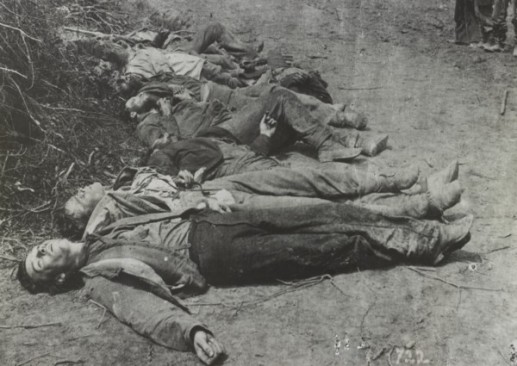 Larry M Edwards is an award-winning investigative journalist, author, editor and publishing consultant. He is the author of three books, and has edited dozens of nonfiction and fiction book manuscripts. Under Wigeon Publishing, he has produced six books. As author, "Dare I Call It Murder? A Memoir of Violent Loss" won First Place in the San Diego Book Awards in 2012 (unpublished memoir) and 2014, Best Published Memoir. The book has also been nominated for a number of awards, including: Pulitzer Prize, Benjamin Franklin Award, Washington State Book Award, and One Book, One San Diego. As Editor, "Murder Survivor’s Handbook: Real-Life Stories, Tips & Resources" won the Gold Award in the 2015 Benjamin Franklin Book Awards, Self-Help. For a sample edit and cost estimate, contact Larry: larry [at] larryedwards [dot] com -- www.larryedwards.com -- www.dareicallitmurder.com -- www.wigeonpublishing.com
View all posts by Polishing Your Prose →
This entry was posted in Civil War and tagged Antietam, civil war, Gettysburg. Bookmark the permalink.