I will be speaking at the San Diego Writers & Editors Guild meeting on Monday, May 23, 2016.

Topic: Using Social Media for Promoting Your Book: The Why, Where, When and How 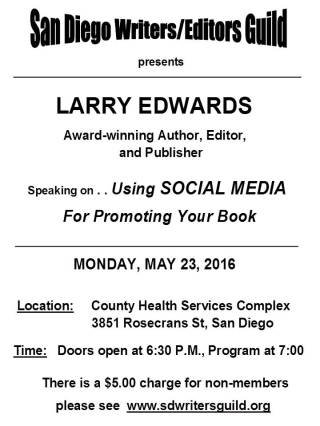 Larry Edwards is an award-winning author, editor, and publisher, and an accomplished

marketer of several books, including Dare I Call It Murder: A Memoir of Violent Loss. Published in 2013, the memoir has been an Amazon best-seller in two categories — memoir and true-crime. Through his marketing efforts, his book has received 177 Amazon reader reviewers (106 being 5-star ratings) and has sold nearly 10,000 copies.

In his presentation, Larry will discuss the most effective Social Media platforms as marketing tools for developing a following of readers, how often an author should post, what is effective material to post, and how to develop a mailing list (and whether a mailing list is even necessary). He will also share the do’s and don’ts of using Social Media.

Larry serves as a freelance manuscript editor through Polishing Your Prose, and has edited a number of award-winning books. As a publishing consultant, he guides authors through the publishing process for paperback and hardcover books, as well as ebooks. Under his publishing arm, Wigeon Publishing, he edited and produced Murder Survivor’s Handbook: Real-Life Stories, Tips & Resources by Connie Saindon. The book received a prestigious Gold Award in the 2015 Benjamin Franklin book awards competition sponsored by the Independent Book Publishers Association.

Larry M Edwards is an award-winning investigative journalist, author, editor and publishing consultant. He is the author of three books, and has edited dozens of nonfiction and fiction book manuscripts. Under Wigeon Publishing, he has produced six books. As author, "Dare I Call It Murder? A Memoir of Violent Loss" won First Place in the San Diego Book Awards in 2012 (unpublished memoir) and 2014, Best Published Memoir. The book has also been nominated for a number of awards, including: Pulitzer Prize, Benjamin Franklin Award, Washington State Book Award, and One Book, One San Diego. As Editor, "Murder Survivor’s Handbook: Real-Life Stories, Tips & Resources" won the Gold Award in the 2015 Benjamin Franklin Book Awards, Self-Help. For a sample edit and cost estimate, contact Larry: larry [at] larryedwards [dot] com -- www.larryedwards.com -- www.dareicallitmurder.com -- www.larryedwards.com/wigeonpublishing/
View all posts by Polishing Your Prose →
This entry was posted in Editing, marketing, Publishing, Writing. Bookmark the permalink.