So, I stay up to effing midnight to get some pole vault action and what do I get in return from NBC? Six vaults as an afterthought to four hours of at times interminable,  jingoistic coverage.  (My friend Rich in Seattle got to watch the entire event—live—via Canadian TV.) Although NBC did include the Canuck decanucking and the ultimate winner. I’m happy for the Brazilian. Nice to see a (sort of) underdog win. 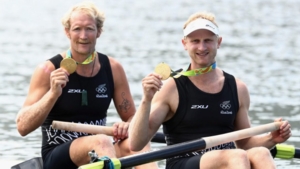 Ditto for the balance beam—I’m happy for The Little Dutch Girl (that’s also the name of a fiddle tune I play). And that swimmer from Kazakhstan. I’m now rooting for the Mexican in 2nd place in springboard diving.

But who does Bob Costas interview in the post-event wrap-up? Shaun White, the snowboarder. Huh? I punched the remote to 4 on fast forward. Ditto during all those first-round heats on the track that took less than 15 seconds to run, followed by 15 minutes of commercials. (Along with the never-ending rounds of beach volleyball, which, as I understand it, will not conclude until after the closing ceremony.)

What NBC and the rest of news media ought to do is rank the medal winners on a per capita basis, say a medal per 1 million people, and maybe even weight it by GDP. The latter would put Fiji—which doesn’t even have 1 million people—near the top, if not at the top, for its first-ever Olympic medal, a gold in rugby sevens, followed by New Zealand, maybe, then Norway, and so on. Let’s put it in perspective. 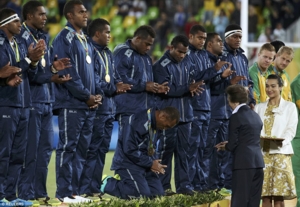 New Zealand is #2 (at this writing), as I suspected (despite the All Blacks’ embarrassing fumble), but with Grenada topping the list, while Fiji is a mere 7th. (When looking at gold medals per capita, Fiji does top the list.)

The Fijians have to stop being so happy and get serious about their Olympics program and branch out beyond rugby; maybe we could start a new competition for Fiji—shark wrestling. That would be more interesting than endless rounds of ping-pong and badminton. How did those geriatric pastimes become Olympic sports, anyway? Next thing you know, they’ll be handing out medals for golf (oh, right, I forgot) and lawn darts—which could  interesting if played with bare feet.

I’m not sure Bahrain (4th), should count, since all the medal winners seem to be ex-pats from Kenya. What’s with that?

And Grenada? With a population less than that of the city of Everett, Washington, I suppose it would top the list. After all, how many Olympic medalists have ever come from Everett? That said, I think Grenada’s medal winner got a scholarship to a U.S. university, so maybe that should be factored into the ranking as well; i.e., take it down a notch or three.

So, my hat’s off to New Zealand, one of my favorite places (and where I made new friends when I covered the America’s Cup regatta in 2000), and Fiji, and the other tiny countries that, despite the odds, have managed to take home a bit of bronze, silver, and even gold. (I just hope their governments don’t put their medal winners in a position of having to melt down and sell their medals to pay the income tax on them as does the U.S.)

What about the United States? Ranks a pitiful 37th, one rung below Russia, no less. (Weighted for GDP, the U.S. drops even lower.) I guess we need Trump to rally the storm troopers and make this country great again, just like East Germany did in the ’80s. After all, I doubt he wants to be one-upped by his pal Putin.

And China? With 1.4 billion (yes, with a “b”), the most populous country on the planet, it ranks a paltry 60th. Must be the air pollution.

And what’s with host country Brazil? With a population of 208 million, it’s only two ticks above China. Must be those pesky favelas.

So, I say cheers to the underdogs of the world, and may you knock a big country or two off their high horses and  win more medals in the Olympics in the days and years to come.

By the way, I didn’t have to make this up. Check it out (it’s on the Internet so it must be true):

Don’t get me wrong, I’m not anti-American. I am thrilled to see my fellow countrymen and countrywomen win their individual medals. They earned them. But in terms of the total medal count that the U.S. news media  and chest thumpers trumpet, it needs to be put in perspective.

American women are dominating the Olympic Games, and it didn’t happen by accident

“Forty-four years after the landmark passage of Title IX, which prohibits discrimination against females in all areas of federally funded education including sports, American women’s athletics is indeed no longer just about participation, it’s about championships.”

I’m happy for the women who today have opportunities their predecessors did not; they deserve it. But the operative word here is “opportunities.” And that relates back to the GDP. Yes, fairness plays a role, but being fair-minded comes at a price. The U.S. made a commitment to fairness—and the associated costs.

Other countries have followed suit—good for them. But some have not, or do not have the equivalent resources to do it. Yet world-class athletes still emerge from those countries and shine brilliantly at the Olympic Games. That deserves acknowledgement and recognition by those who trumpet U.S. greatness but only look at the raw numbers. The fact is, with its population and GDP, the U.S. (as a whole, not on an individual basis) is underachieving compared to some of its smaller counterparts—albeit not as much as China.

Larry M Edwards is an award-winning investigative journalist, author, editor and publishing consultant. He is the author of three books, and has edited dozens of nonfiction and fiction book manuscripts. Under Wigeon Publishing, he has produced six books. As author, "Dare I Call It Murder? A Memoir of Violent Loss" won First Place in the San Diego Book Awards in 2012 (unpublished memoir) and 2014, Best Published Memoir. The book has also been nominated for a number of awards, including: Pulitzer Prize, Benjamin Franklin Award, Washington State Book Award, and One Book, One San Diego. As Editor, "Murder Survivor’s Handbook: Real-Life Stories, Tips & Resources" won the Gold Award in the 2015 Benjamin Franklin Book Awards, Self-Help. For a sample edit and cost estimate, contact Larry: larry [at] larryedwards [dot] com -- www.larryedwards.com -- www.dareicallitmurder.com -- www.larryedwards.com/wigeonpublishing/
View all posts by Polishing Your Prose →
This entry was posted in humor, Sports and tagged comedy, Fiji, New Zealand, Olympics, rugby. Bookmark the permalink.