Posted on November 24, 2014 by Polishing Your Prose

A Civil War Thanksgiving: Something to think about as we sit in safe, warm places, feasting on our turkey dinners this coming Thursday.

Private Oney F. Sweet, a Union soldier in the 1st Pennsylvannia Light Artillery, Battery F (Ricketts’ Battery), describes in a letter to his mother how he and his fellow soldiers spent their Thanksgiving Day and the subsequent days of what many of us now take for granted as a festive four-day holiday. 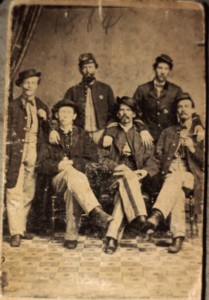 [W]e were aroused up at 3 o’clock [a.m.], cooked breakfast, and marched at daylight. We crossed the Rappidan [in Virginia] about noon. Camped at dark. An awful cold night. That was the way I spent my Thanksgiving.

Nov. 27 marched before daylight. Oh it was a cold morning to get up and stand around a fire. I would like to have been sitting by mother’s stove that morning.

We marched on a plank road 3 miles and then we had a turn pike. At about noon we came upon the Johnnies and there was sharp skirmishing. We did not fire any. Our orderly seagt., the one I sent you a photograph of, was wounded in the thigh by a sharp shooter. After dark we went to work and threw up breast works to protect us if we had a fight.

Early next morning the rebels were gone and we advanced in line of battle. I saw several dead rebs and several graves.

At about 8 o’clock we came in sight of the rebs again. They were drawn up in line of battle and we could see them very plain. They had a strong position. We opened on them and they opened on us. Several shells struck near the battery. . . . At near dark we fired several shells at them but they did not fire back.

We expected a big battle would come off next day but at 12 o’clock we was aroused up and marched back. . . . We had to leave all of our blankets behind and we marched around on to the extreme left of the line. At noon we found a plenty of rebs but our skirmishers drove them back.

I did not sleep much that night. I had no blankets and it was awful cold. 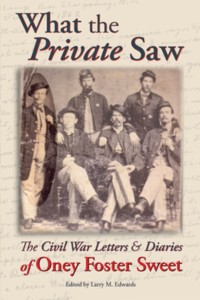 This letter, along with dozens of other letters and his many diary entries, will be published in the book What the Private Saw: The Civil War Letters and Diaries of Oney Foster Sweet.

The book—edited by Larry M. Edwards—will be released by Wigeon Publishing on April 9, 2015, the 150th anniversary of “sesesh” surrender at Appomattox, ending the U.S. Civil War.

Sweet’s previously unpublished writings offer a unique glimpse of the war from the bottom looking up; that is, from the view of a private rather than a general or a commanding officer, the ones who wrote the official reports—a private simply trying to survive a deadly war in which one in five combatants perished, with more deaths caused by disease than combat.

The unwritten part of our war is greater than all that has been written. Two soldiers side by side in a hot place in our battles did not see the same things. The generals did not see what the privates saw.

His descriptions of the battles of Bull Run, Antietam, Chancellorsville, and Gettysburg—among others—captivate the reader.

Yet, his missives relate more than just the hard, brutal times with “minnie balls . . . whizzing by our ears.” They spent more time in camp—especially during the winter—than in combat, and they entertained themselves.

A soldier’s delight: the mail, the paymaster and tobacco.

Occasionally, they received “a Quota of whiskey issued out to us” and at other times “Some licour” found its way into their hands, resulting in “Some fun in camp.”

Not a few soldiers, including Sweet, spent time imprisoned in a guard house for fighting amongst themselves or other infractions. (Surely the whiskey and “licour” had nothing to do with that.)

Weather permitting, they “played ball” as well as cards, held boxing matches, attended dances, read newspapers, and read and wrote letters, in addition to the drills, inspections, washing and mending clothes, building shelters, and foraging for food when their rations ran out.

This first-hand account will be a delightful and informative addition to the many extant volumes on the American Civil War. It also serves as a companion to Trumpets of the Morning, written by Marian Julia Sweet, Oney Sweet’s daughter. Her book offers a fictionalized account of the loneliness, anxiety and difficulties she believed her parents endured; it was recently published (2014) by three of her grandchildren: William Ketchum, Joan Ketchum Reamer, and James Grant.

For more information about  What the Private Saw and excerpts from the book, visit the website http://whattheprivatesaw.com . . .

Other books from Wigeon Publishing: